Our very own Weston Historical Society teaches us about Weston's past and present: 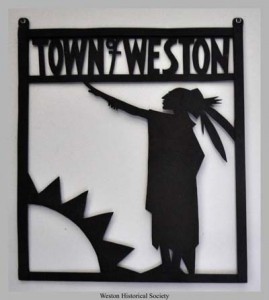 Since colonial times the Town of Weston has taken its
character from the many generations that have cherished
local democracy,broad-based citizen involvement, and
a strong sense of community. In the tradition of home rule,
Westonites call Town Meetings in the belief that every
eligible voter is a legislator.

Weston was an Aspetuck hunting ground until “outlivers”
from the town of Fairfield began settling here in the early
eighteenth century. Norfield Parish was created in 1757
and the Connecticut General Assembly formally recognized
Weston as a separate, incorporated town thirty years later.

Early Weston was agricultural but soon the use of abundant
water power led to the growth of industry. By 1830 Weston
was a thriving town of 3,000 people and home to foundries,
a grist mill, ax manufacturing, a furniture plant, and four churches. The population began to decline rapidly
by the 1850’s, however, due to the opening of the richer agricultural lands in Ohio, the development of
steam-powered industry along the coast, and the rise of the industrial towns along the Naugatuck River.

The revival of the Town began early in the 20th century with the arrival of artists, musicians, theater people,
writers, and summer residents from New York City, a vanguard of the waves of commuters who first arrived
by automobile in the 1930’s. This mixture remains and, together with its excellent schools and many
conservation-protected lands, continues to give Weston its special character.

— from the Weston Town Charter 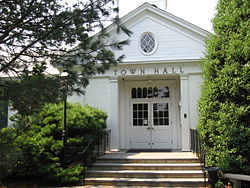 Weston is a residential community in Southwestern
Connecticut (about 45 miles from New York City) with
a population of approximately 10,150 residents.
Residents enjoy two acre zoning, a lack of commercial
development, a focus on open space, and an outstanding
educational system.

Amenities:  Weston’s unique rural, yet sophisticated,
environment boasts an absence of busy commercial
boulevards.  “The Center” as the locals fondly call it,
is the go-to place to shop and to meet.  There one can
find the local food market, a bank, pharmacy with gift
store, dry cleaners, real estate office, post office,
spirits shop, hardware store, restaurant, and gas and service station.

Culture:  Weston has an active arts scene.  The Weston Commission for the Arts organizes music, art,
drama and other valuable cultural events. Weston Library offers a variety of programs, book clubs,
and workshops for residents of all ages.  An active Senior Activities Center runs a wide range of
programs, which include yoga and fitness, knitting/crafts, and much more.

Open Space:  Almost one quarter of the Town is permanently devoted to open space.  Whether the northern
Nature Conservancy – Lucius Pond Ordway – Devil’s Den containing 1,765 acres, or Katherine Ordway
Preserve containing 60 acres on the east side of Weston, or 645 acres of Aspetuck Land Trust sprinkled
around the Town, every neighborhood can claim some piece of recreational land nearby.

Country Fairs & Farmer’s Markets:  Emanuel Church and Norfield Church are famous for their fairs.
The Grange Fair at harvest time is another popular event, along with Weston Elementary and Weston
Intermediate School’s PTO’s Memorial Day Fair which is a draw for the entire region.  Each year the Fair
follows an old fashioned Memorial Day Parade, which is hosted by the Weston Volunteer Fire Department.
After the parade, all can have free hot dogs and soda.

A popular Farmer’s Market is held on the grounds of the Coley Homestead at the Weston Historical Society
on Saturdays from May through September. The Weston Grange is host to a “Winter Market” from mid-
November until early May.

Community Involvement:  Weston has a long history and reputation for community volunteerism.
The citizens devote countless hours to serving on Town boards and commissions.  The Volunteer Fire
Department and EMS Squad rank high in their commitment by providing extraordinary service to Town
citizens when in need.  The Weston Historical Society, the Kiwanis Club, the Weston Women’s League,
the Weston Garden Club, and the League of Women Voters are just a few of the organizations that
regularly dedicate themselves to improving the Town.  Weston is a warm and inviting place for those
who enjoy being a part of their community. 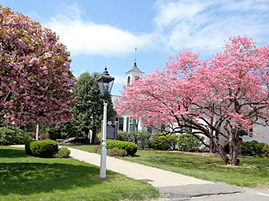 It is a picturesque town located among Fairfield County’s
most idyllic ones. It would be the perfect location for a Norman
Rockwell rendering of a small town – if that small town had
residents such as Keith Richards and Christopher Walken
walking its tree-lined streets.

Yes. Weston, Connecticut, is all that.

Located about an hour from New York City and adjacent to
Westport, its shoreline-hugging sister, Weston is not your
typical New England hamlet. In addition to the famous Rolling
Stone and the infamous actor, Weston’s celebrity residents include – and have included – Christopher Plummer,
Robert Redford, Tom Cruise, Jose Feliciano, Eartha Kitt, Donna Summers and James Naughton. And, of course,
the ongoing rumor persists of Johnny Depp’s alleged residency.

Its population is small – 10,150 – but its zoning is a generous 2 acres. And 20 percent of Weston’s residents
commute to Manhattan each day.

For those who spend the better parts of their days in Weston, the town offers a profusion of benefits, chief
among them are its schools. Top rated in Connecticut, the Weston public school system (lower, middle and
high school) is centrally located in town in a campus-like setting.

“It’s a great place to raise children,” said resident Gail Sagel. “The schools are like private schools. Just look
at some of the colleges the kids get into: University of Pennsylvania, Dartmouth, University of Michigan, Emory,
Yale and Harvard … and the list goes on.”

According to Sagel, life in Weston is something of a throwback to a more simple time. “On Saturday mornings,
I love the small-town feeling of running into neighbors while shopping for fresh fruits, vegetable and pies
at the farmers’ market at the Coley Homestead on Route 57.”

Sagel also takes in the town’s natural beauty when she hikes the pristine trails that snake through one of its
nature preserves, Devil’s Den. And she enjoys the sweeping views from the reservoir at the top of Valley Forge
Road.

For a nominal fee, Weston residents are eligible to use some of the facilities in Westport, namely Compo Beach.
And Westport’s shopping and train station are only a few minutes away.

As to the local celebrities, longtime Weston resident Donna Gordon fondly recounts the following tale: “When my
son Jeremy was in elementary school, he participated in the end-of-year field day. All the parents came to watch
their kids participate in the festivities — relay races, sports, etc. Keith Richards’ daughter was in Jeremy’s class.
The games started pretty early, and most of the parents were sipping their coffees. But not Keith Richards. He
was drinking beer.”

You won’t see that in any Norman Rockwell paintings.